Following the recent development in which logical methods can be applied to the formal analysis of social networks, I present work on the use of logic to study social influence and herd behavior in epistemic social networks. In such networks, we first consider agents who adopt a new fashion or behavior depending on whether a “sufficiently large enough group” of their neighbors already has adopted the behavior. We provide different types of models as well as a simple qualitative language to reason about the concept of a “strong enough” trigger of influence. Using our logic, important results from network theory about the characterization of informational cascades can then be derived. 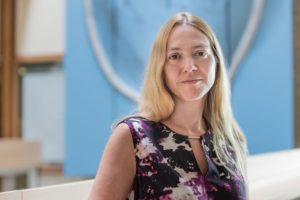 Sonja Smets is Full Professor in Logic and Epistemology and the Scientific Director at the Institute for Logic, Language and Computation (ILLC) at the University of Amsterdam. She currently also holds a 0.2Fte appointment as Professor II at the Department of Information Science and Media Studies at the University of Bergen. Sonja Smets obtained her PhD at the Free University of Brussels in 2001 after which she worked at the Flemish Fund for Scientific Research, the Free University of Brussels and the University of Groningen before moving to Amsterdam in 2012. She has received numerous awards and research grants, including the Birkhoff-von Neumann Prize awarded in 2012 for her studies on quantum structures and related epistemic semantics, an ERC starting grant funded by the European Research Council (ERC) and the European Community and a VIDI grant funded by the Innovational Research Incentives Scheme of the Dutch Science Foundation. Her research programme ranges over Logic (in particular non-classical logics, including non-monotonic logics, belief revision, modal logic and quantum logic) and its applications in AI and Philosophy; Multi-agent Systems; Formal Epistemology; Philosophy of Science, Philosophy of Quantum Physics, Quantum Information and Computation. Her latest publications focus on the application of Logic for Social Network Analysis.

Department of Information Science and Media Studies, University of Bergen